The Chinese empire of the Qing dynasty is the wealthiest and most populous state on the planet. However, the commerce of the globe is dominated by Westerners. 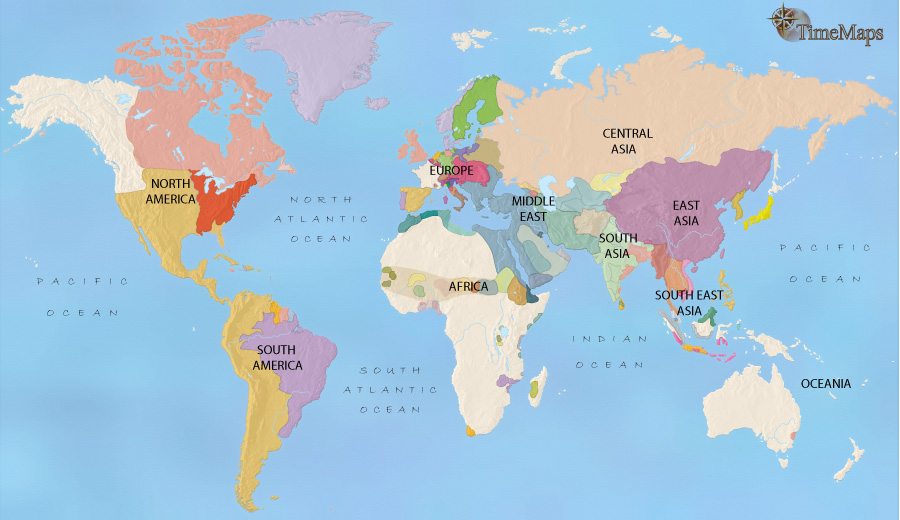 Every part of the world is beginning to feel the impact of European expansion by this time, though some more than others.

The Chinese empire has experienced a run of three of the most remarkable emperors in its history – in fact, in world history. It is the largest state in the world at this date, and by far the most populous. It is almost certainly the wealthiest.

The only other state which comes near to rivaling it is the British Empire which is in the process of acquiring large slices of India. This turn of events has been made possible by the decline of Mughal power in the sub-continent. The chaotic situation this caused allowed European nations to extend their influence from their small toe-holds on the Indian coast. Inevitably, rivalry set in between the different nationalities, and, thanks to its command of the seas, Britain has emerged as the leading power in India.

To the west, the Ottoman empire remains a huge state. Its economic and military effectiveness has by now fallen behind those of the leading European nations, but its government is still capable of real reform. The Ottoman sultans have succeeded in modernizing their empire to some extent; the trouble is, Europe is by now in a process of transformation which does not stand still. It has now just entered the early stages of industrialization. This will greatly add to her global effectiveness in the coming decades.

In the political sphere, also, Europe and its offshoots in the Americas have been experiencing unprecedented change. In England, the Glorious Revolution of 1688-9 led to rights of individual citizens being guaranteed by law. Ironically, these very principles which Britain pioneered led to a rebellion against her by her American colonies. Most of these have now broken away from British rule to form a new nation with its own deliberately designed constitution, the United States of America.

This same political momentum is now bringing about Revolution in France, which starts in this year, 1789. This will soon transform the European political scene for ever.

At the root of all this relentless change is the increasing flow of wealth into Europe – a wealth based on Europe’s dominance of the oceans of the world. Tragically, much of this is a cause of misery to countless millions. The Atlantic Slave Trade is at its height just at this date, sending tens of thousands of enslaved Africans each year to toil on plantations in the Americas. On the back of this trade, the sugar industry brings in huge profits to merchants and financiers of Britain, France and other European countries. This has helped fuel the rise of a new middle class, broadening the scope of the educated sections of society. As a result, the old, neo-feudal structures which have prevailed in much of Europe for centuries are coming under increasing attack. This has now spilled over into active Revolution.

The impact of the slave trade on Africa has been wide ranging. Central Africa, which was already underpopulated before the slavers arrived in force, has suffered doubly from slavers from the Atlantic coast (Europeans) and from the Indian Ocean coast (Arabs). Nowhere is safe, and a vast region has been striped of a significant portion of its population. The survivors have had to militarize their societies, to the extent that the entire region has become a virtual war zone.

West Africa, being much more densely populated, has not been so badly affected. Nevertheless some scholars think that the slave trade led to more frequent wars here, and, being now fought with European-sourced firearms, these were more deadly than before.

One phenomenon which certainly appears in West Africa at this time, though probably unrelated to the slave trade, occurs on the inland grasslands south of the Sahara. A number of campaigns – “jihads” – install puritanical Muslim groups as rulers of several kingdoms. These are mostly the work of members of the Fulani, a cattle herding and trading people who have lived in and around the trading towns of the region for centuries.

In North America, Native American tribes still hold sway in most of the continent. Apart from in the east, people of European extraction live in widely scattered, very isolated settlements – trading posts, forts and mission stations – and make only the most minimal impact on their surroundings.

The eastern parts of the continent, however, are now home to societies of European – mainly British – descent. Their way of life has been transplanted wholesale from their original homelands. Most of these societies are now part of the United States of America, a new, independent nation which in 1789 completes the task of equipping itself with a constitution whereby to govern itself.

To the north, in that part of North America still under British rule, a large French-speaking community along the banks of the St Lawrence river stands out from the English-speaking settlements surrounding it.

This political divide masks a more fundamental division within these American societies. Although of common ancestry, they fall into two quite different types. In the north, communities of merchants and farmers live in what is probably the most open and equal society in the world at this date, free from domination by a small hereditary elite of landowning families. To the south, one of the more unequal societies of the world exists, one dominated by a small group of white landowners who rely in slave labour of African extraction to work the tobacco and cotton plantations they own.

Change in Central and South America

Southern US society is in fact the most northern extension of a swathe of slave-owning societies that have become established in the Americas. This swathe takes in the fabulously wealthy Caribbean islands – the jewels on the crowns of the European powers which control them – and reach down to plantation-dominated Brazil. In all of these, rich families of European descent own land on which African slaves grow and process crops for export to Europe. No wonder there is such an insatiable demand for slaves for Africa.

In the Spanish-ruled territories in the rest of Central and South America, a scarcely less equal society has grown up. Here, a small colonial elite has divided the land into vast estates, leaving the native population as impoverished serfs tied to the lands.

European off-shoots have not yet been established in any significant way in other parts of the world. A small farming colony has been planted in South Africa by the Dutch, mainly to provision the ships of the Dutch East India Company on their way to trade with the East; and a tiny penal colony has been established on the south-east coast of Australia by the British. However, other parts of the world are coming under European control, even though not settled to any great extent by European colonists. The Dutch have established their rule over much of the East Indies, and are expanding this control as the years go by. Similarly, and on a much larger scale, in the chaos left by the decline and fragmentation of the Mughal empire, the British are gaining control of more and more of the Indian subcontinent. In most of the rest of the world, in the Middle East, Africa and the East Asia, European influence is still confined to small coastal enclaves from which they trade with the native populations – either on a more or less equal footing or even in conditions of inferiority and difficulty.

In East Asia, vibrant societies barely notice the European intrusion. China is a huge, self-contained empire; its enormous and sophisticated internal economy feels no need for European trade. Besides, the Chinese harbor a hearty contempt for those uncouth barbarians. Trade with the west is limited to the southern ports of Macau and Canton. Tokugawa Japan and Chosun Korea also actively keep the Europeans at arms length: Korea is known as the “Hermit Kingdom” for its closed-door policy, and Japan allows only a tiny Dutch trading settlement in its southern port of Nagasaki. It would be a mistake to think of these societies as being sunk in backward-looking stagnation: Japan, for example, has probably one of the most dynamic and “modern” commercial societies on earth during the 17th and 18th centuries.

In South East Asia, powerful kingdoms continue along their own trajectories, only marginally affected by Europeans. Burma and Thailand continue a centuries-long rivalry, and Vietnam continues its centuries-long expansion south, accompanied by civil wars.

Nevertheless, the global picture in 1789 is clear: the entire world is being drawn into one overall trading system, based on the ports of Western Europe. A globalized economy is taking shape, and world history has acquired a unifying momentum which is leaving no region of the world untouched.

For details of the different civilizations, click on the relevant timeline above.

More ‘Dig Deeper’ links may be found in the regional maps. To access, click on the markers in the world map.

Civilizations of the world

What else is happening in the rest of the world... 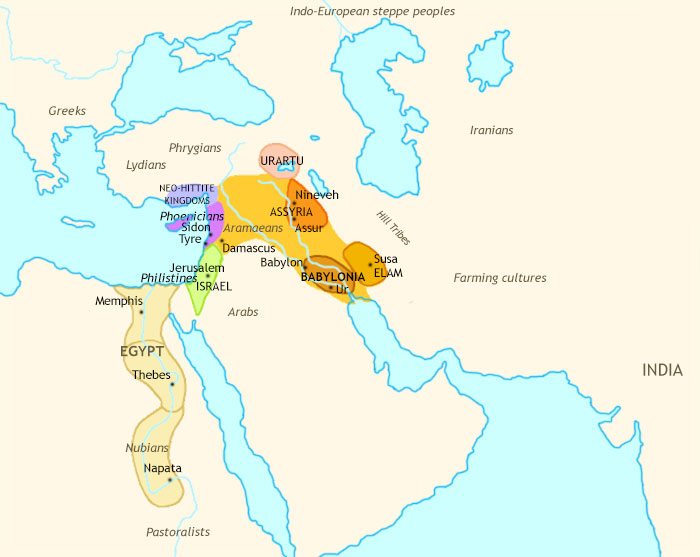 In the late 13th century BCE, population movements in Europe caused groups to take to the sea and raid the coasts of the eastern Mediterranean. These groups appeared in the records as the “Sea Peoples”. Their impact was devastating. By the end of the century the Hittite empire had been destroyed. Several Indo-European groups such […] The decline of the Zhou kingdom In northern China, kings of the Zhou dynasty came to power in the 11th century BCE. Their kingdom expanded over an ever-larger area of China. To help them govern their growing realm, the Zhou kings divided it into many districts, each under a powerful local lord. These lords served […] 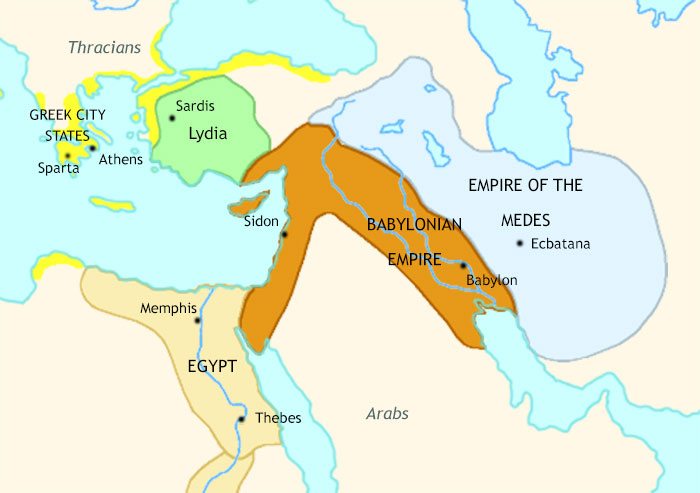 The Middle East In 585 BCE the Assyrian Empire, which had dominated the region for centuries, had been replaced by three large states. These were the Babylonian Empire, ruled by the famous king Nebuchadnezzar; the empire of the Medes, an Indo-European speaking people who had come down from central Asia and settled in Iran; and […] 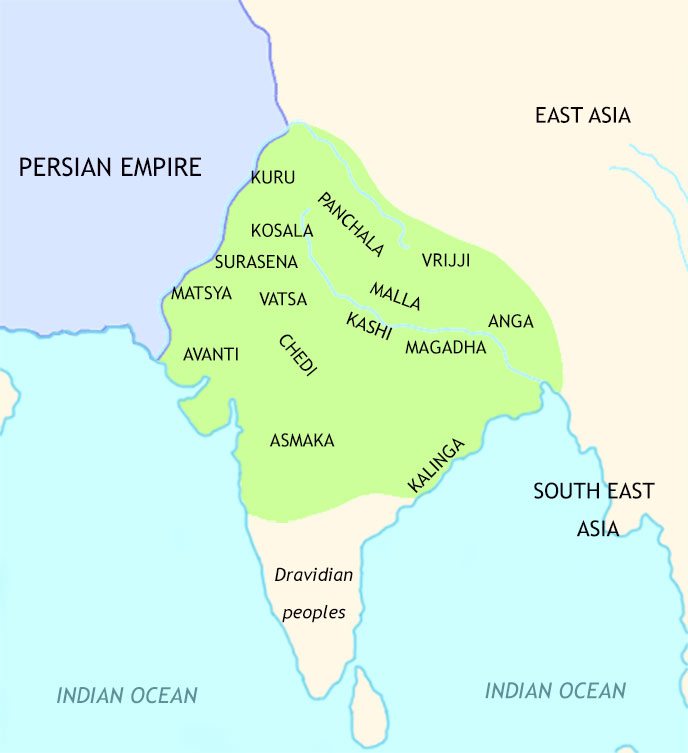