The history of British India almost ended in a great rebellion, but the British were able to regain control. 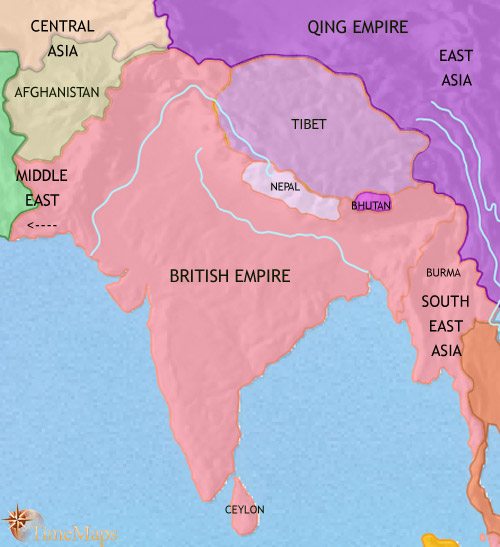 What is happening in India and South Asia in 1871CE

The end of the Sikh empire

After Ranjit Singh‘s death in 1839, the Sikh empire which he had so skillfully built up rapidly fell into chaos. The army of the British East India Company then marched in and brought its territory under its control. This left the British in complete control of the Indian sub-continent.

In 1857, however, the history of the British empire in India almost came to a sudden and violent end when many Indian troops in the Company’s army rebelled against their British masters. The rebellion spread, and was supported by many Indians, of all castes, including some princes. Several important cities in northern India fell to the rebels. The majority of the Indian troops remained loyal to the British, however, and several Indian princes rallied to the British. All the southern part of India remained untouched by the rebellion. Nevertheless, it was only with the utmost difficulty that the situation was brought under control. The rebellion lasted more than a year.

By the time peace had been restored, the British had brought an end to the rule of the East India Company. From now on, the British parliament took over direct responsibility for governing India. The British set about creating an efficient civil service, which was inspired by the Chinese imperial system, and became the model for the civil service in Britain.

Meanwhile, the British have been extending their power into most of Burma, and have also made a disastrous attempt to bring Afghanistan under their control (1838-42).

Within the India, the British are beginning to introduce industrialization, most notably in starting to develop a railway system which will span the subcontinent.

The British in India

The British Raj in 1856  and the following maps