The long history of India and South Asia has entered a new chapter with the replacement of the British empire by independent republics. 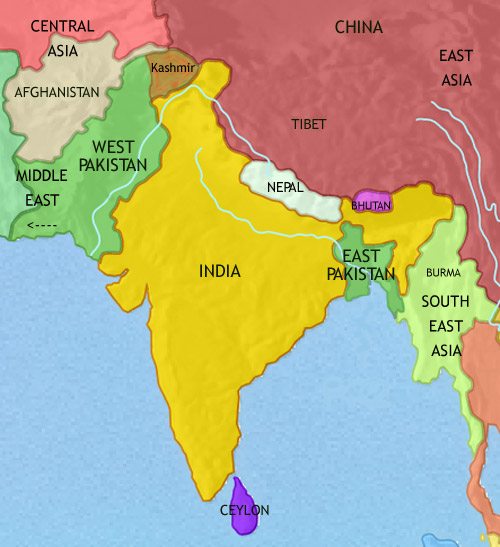 What is happening in India and South Asia in 1960CE

The peoples of South Asia have entered a new chapter in their history, with the replacement of British rule by several independent countries.

The years after the World War 1 saw a growing independence movement, under the charismatic leadership of Mahatma Gandhi and Jawaharlal Nehru. The ambivalent attitude of its members towards supporting Britain during World War 2 did not prevent Indian troops from performing invaluable service to the Allies, especially against the Japanese in Burma.

The British knew they had no choice but to grant India independence; this took place in August 1947. Two countries came into being, both dominions within the British Commonwealth – India and Pakistan. Pakistan consisted of those areas where a predominantly Muslim population lived, and was therefore divided into two parts, West Pakistan and East Pakistan. However, in those areas where the two communities lived side-by-side, especially in the Punjab, the boundaries could be nothing other than arbitrary. As a result, on Partition refugees streamed across the borders in both directions seeking a new homeland. This mass migration was accompanied by horrific violence in which an estimated million people were killed.

Almost immediately after independence, India and Pakistan were at war with one another over the frontier province of Kashmir (1947-9). The war ended in stalemate and Kashmir has been a bone of contention between the two countries ever since.

Sri Lanka  (then known as Ceylon) became an independent nation in 1948.