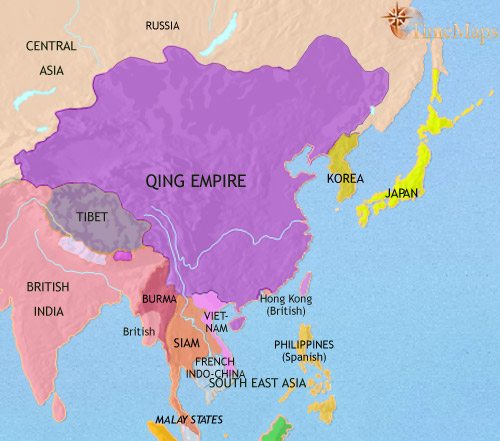 This activity looks at East Asia, and in particular the countries of China, Taiwan, Japan and Korea (today, North and South Korea). Vietnam and Tibet may also be included, but at the moment their national histories have not been written up for the TimeMap (this will happen soon).

The lesson idea does not look at each country individually, but at the connections between them. In so doing, it will illuminate the history of East Asia as a key region in world history, as well as add to an understanding of each of these different countries. It will also provide insight into influences (espcially one major element) coming into East Asia from further afield.

In groups (or as individuals, if you feel your students can handle this task as a homework assignment), students look at the TimeMap of World History, at the East Asia map pages from 3500 BC through to AD 1914.

Students then do the following:

1. List the technologies, ideas and other elements of civilization which have travelled from one country to another in East Asia, throughout history. Give approximate dates when the “travelling” occurred, and specify the nature of the contacts which led to this “travel” – trade? Migration? Conquest? Any other? (If it’s not clear from the TimeMap, make an intelligent guess).

a) the major developments affecting East Asia, including the spread of key elements of civilization (in religion, thought, politics and government, technology) between the different countries, and

b) the changing nature of the relationship between these countries over time.

For class discussion (or if you prefer, for individuals or groups to tackle):

Which country was the most influential in East Asia?

Why was this, do you think?

How was this influence projected?

When and how was this influence ended (if ever)?

Which influences came in from outside the region?

Which elements originating in East Asia spread to other regions (including the West)?

Back to AP world history page